Should You Buy a Sliding Back Band Saddle?

An opinion by Pat Weeks

I’m a recent convert to sliding back band (SBB) saddles, and I’ll explain why.

I have three miniatures that I drive as singles in two wheeled carts, and although I have shown them locally in the past, now all of my driving is recreational on back-country dirt roads, or trails in the woods which are rough and uneven with the occasional stump, hole or limb to cross. The sliding back band saddle has proven to be a real asset for me and for my ponies. 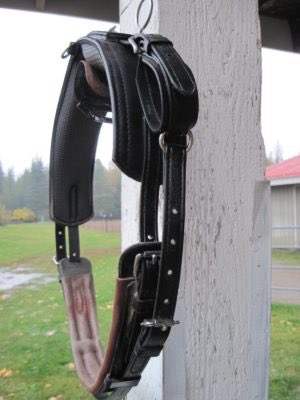 A sliding back band saddle has a continuous strap going over the back of the saddle with a tug (shaft loop) on each end and continuing down from the tug to an over-girth that also slides within loops on the fixed girth (belly band). 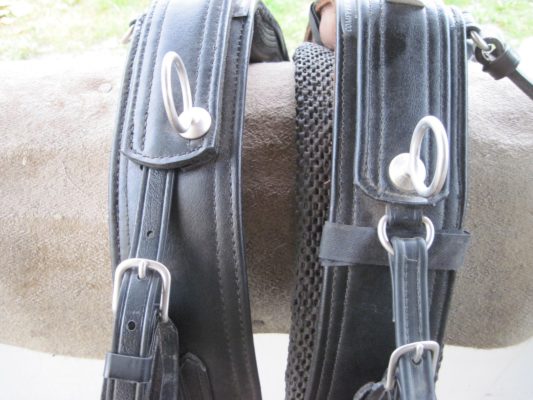 A fixed tug saddle has the tugs attached directly to the saddle, often with a D-ring. (SBB on left, fixed on right.)

With a sliding back band saddle, when the cart tilts and the shafts become uneven, as when one wheel goes into a hole or over a berm, the strap holding the tugs slides left or right to compensate for that height difference. In these two photos, the right shaft is uphill and the left shaft is downhill, so the left tug has slid down a few inches to compensate and keep the saddle nice and straight on the pony’s back.

A saddle with no sliding back band would be twisted to the left by the weight of the lower shaft, causing discomfort to the horse. 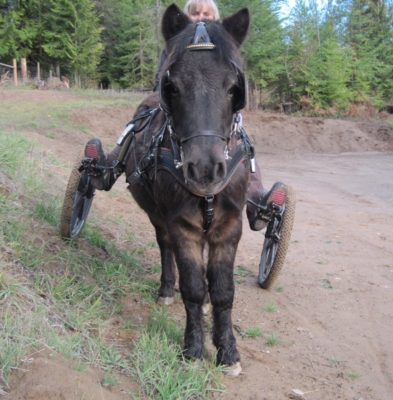 If you have a false martingale attached to your girth (attaching the breast collar to the girth), it can also twist between the horse’s front legs and pinch. Notice how the false martingale on my pony in the photo remains straight, because of the sliding and leveling of the tugs on his SBB saddle and girth, even while one shaft is considerably higher than the other.

If you only intend to drive in an arena or down well groomed roads, then a regular, fixed tug saddle should serve you well. But if you can see yourself someday driving in a bar ditch on the side of a road, or off-roading it with your horse, then purchasing a harness with a sliding back band might be the better choice.

2 thoughts on “Should You Buy a Sliding Back Band Saddle?”