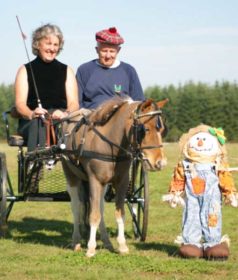 A few weeks ago, I was thinking about what harness information to include on our new website, and about the “history” of our Chimacum Harness; I thought about the Whitemans.  It is, really, their doing that we sell mini equipment in the first place, especially harness – they tested our very first prototype. So, let me introduce you to Ron and Dorothy Whiteman!

Ron and Dorothy are both educators from Elma, WA, in Grays Harbor County.  A few years ago, she retired from teaching, and Dorothy has been spending her post-retirement time training mini horses and their owners.  She is well-known, well-respected, and well-loved.  So is Ron. You’ll find them on the Evergreen Miniature Horse Club Facebook page, as well as at their own website, sonnybrier-rivendell.com.

In early 1994 or ’95, I received a phone call from Ron Whiteman, who was then president of the Evergreen Miniature Horse Club.  Ron told me that the club was having a miniature horse show in Elma and he really wanted me to come as a vendor.  My first thought was “Are you kidding!?”

No one sold very much miniature horse tack then, and although I’d spent a good deal of effort finding vendors to make mini products for me, they were limited.  Most and vendors just said “No” – no one had measurements for proper sizing, and the tack that was being made generally didn’t fit well, and it wasn’t the best quality.  Furthermore, I had no way to haul tack – I was teaching school myself, then, and we were just selling out of my husband, David’s, antique store.  Ron, however, was undeterred and kept chatting at me until I agreed to figure out how to come.

I talked with Leroy at my harness shop about what I could take, what he could make for me, and we decided to just do what we could.  I borrowed my father’s homemade garden hauling trailer, which had plywood sides about 3-feet high with a plywood top which he’d made so brush wouldn’t blow out on the way to the dump.  I convinced David that he really had to come along and drive the truck since I did not, do not, and never will haul trailers.  Maren, who was a teenager, thought anything to do with horses was fine and agreed to help.

The rest is history, as they say.  We hauled tack in Papa’s trailer for years – to every Evergreen Miniature Horse Club show and many others in the Northwest, finally moving up to a 16 ft and then a 20 ft closed trailer.  When we left the northwest in 2007 we left behind a 20+ years of horse club relationships with many friends, including the Whiteman’s.

In the mid-1990s, Miniature horse harness was pretty much limited to fine leather show harness or ill-fitting imported cheap nylon harness. So, we began working to develop a traditional, breast-collar-style, pretty-enough-for-shows, practical-enough-for-every day, miniature horse harness.  It needed to fit well, be comfortable, pretty, durable and affordable.  Ron and Dorothy helped with beta testing, bought harness, and then convinced other people to try Chimacum Tack’s own mini harness.

Recently I asked Dorothy for some pictures to share on the new website showing how she and Ron use Chimacum Tack and Comfy Fit harness.  She sent me pictures and information about how she uses our harness every day that really span the scope of Chimacum’s mini harnesses and I’m very happy to be able to share them with you: 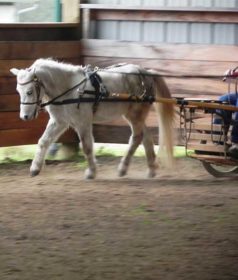 These pictures can all be classified as first drives.  The first one is Fifty, my grandson’s horse.  I start all of my horses in an open bridle so they know what is going on behind them when they hear the noise of the moving cart.  Once they are settled, then we add the blinkered bridle.  The second horse is Dino in the same harness. A Chimacum Pleasure harness in betathane, with a leather bridle. (They’ve used this same one since the mid 1990’s.) 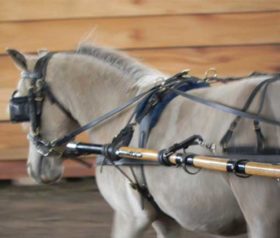 We do a lot of mixing and matching around here.  With 12 horses, each is better with his own bridle, but the harness goes back and forth from one to the other.  We have a pleasure harness in A and another in B, two pairs harnesses, and several ComfyFit harnesses.

The next picture is of Pic wearing one of the original Chimacum Sport Harnesses. (Ron and Dorothy had the very first prototype of our Chimacum Sport Harness, and still use it all these years later.)  This was taken at a friend’s place where we were weekending and practicing for the CDE at Lincoln Creek.  Pics bridle does not go with the harness; he is wearing his show bridle because we were too lazy to change out the bit. 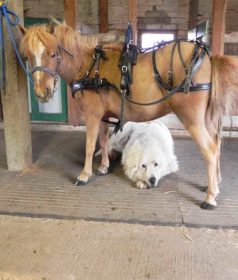 Breezy is wearing the Chimacum Sport Harness with the straight breast collar and then again with the newer “freedom” collar.  In the snow picture, she is giving a ride to Ivy the Airedale who has been playing in 15 inches of snow.  In the second picture, she is the model for an article on harnessing and hitching that appeared in the Miniature Horse World.  Titus, the livestock guarding dog, is making sure that we are following farm protocol. Her girth is not yet attached, nor are connecters for the breast collar. 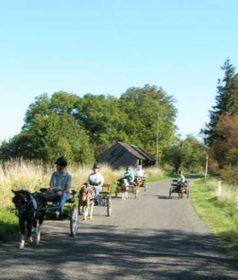 Next is a picture of a trail drive along the Chehalis River.  Three families participated and there was an assortment of Chimacum Pleasure Harnesses.  This was taken in October of 2003, and these harnesses are still in service, some on a daily basis. 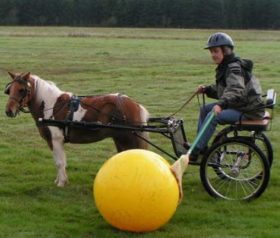 After that is a cute picture is of a little horse we owned for a while, Annie.  She is wearing the Chimacum Tack betathane pleasure harness.  The was a Halloween fun day at Happ’s in Chehalis, WA.  In this game, the object was to push the giant ball over a marked distance.  Those folks who were riding their horses rather than driving, had a distinct advantage! This was also taken in October of 2003

The top picture shows Steps wearing the same prototype pleasure harness that Annie was wearing in the picture with the giant ball.  Steps is 32 inches tall to Annie’s 34”.  It fits both of them nicely.  Steps has just finished his first CDE and my father was there to watch.  On the way back to the barn, we met a scarecrow that was as big as my horse, or maybe bigger. 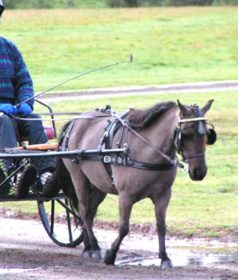 This next picture shows Harmony wearing the first prototype sport harness, before ComfyFit.  This was the original straight breast collar – the Freedom Collar was designed next -taken on a freezing cold February day at an Arena Driving Trial at Happ’s.  Harmony and I were alone because the weather was so bad that no one wanted to go out with us!  It turned out to be better than expected and the few hardy souls that competed had a good day.  Harm’s bridle is from another harness.  This is the B size harness with and A size bridle. 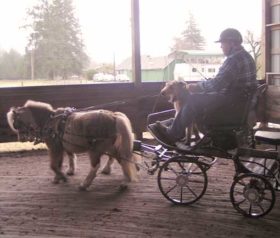 Ron’s pair, Chip and Reveille, wear the Comfy fit pairs harness as they take It’, the Airedale, for a ride. Cadence finishes the last hazard at the CDE at Inavale in July of 2015.  She is wearing the original prototype sport harness (2003) but with green accents added and with the later model contoured breast collar.  This harness gets daily use and looks good enough to show in. 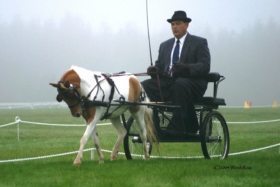 It’s so fun to think back on the evolution of our harness.  How far we’ve come!  And oh, so many miles still being put on those original prototypes.  I’ll wrap up with one last picture – my personal favorite picture of Ron Whiteman, driving with the original prototype harness in 2005.  We really wouldn’t be here were it not for our fabulous customers!

Thanks Ron and Dorothy!  Here’s to another 25 years of driving adventures!

4 thoughts on “History of Chimacum Harness: Meet the Whitemans!”