For years we have been hoping to be able to bring you a treeless option for the Comfy Fit harness and now we can! I had a customer that really needed a treeless for her young driving horse, so I begged and pleaded with the harness maker and he agreed to make one. And now we can offer them to YOU!

Thank you to Dorrie for sharing her story with us:

“Hi. My name is Dorrie Miller and I just wanted to share my experience with my Comfy Fit harnesses.

My husband and I trail drive and we go over some pretty tough terrain. We wanted to upgrade our harnesses so our ponies would be as comfortable as possible while doing their job. I ordered 2 harnesses at the end of last year. One was for a 9 year old 29″-30″ mini and the other was for a growing 3 year old (now 4 yrs old) Shetland that was 38″. I think he has already grown more since I ordered his harness!

The 29″ mares harness fit her right out of the box. The Shetland however was having some issues. (I say all the time that he’s like a gangly teenager. I also call him a giraffe when looking at him from the front.) He’s as cute as can be but kinda like a cartoon character. Lol! 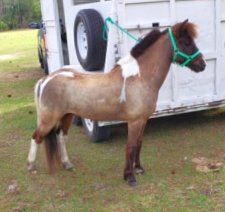 Once we got all his parts and pieces of the harness to fit him (he needed a bigger martingale as the smaller one was very tight, different hip straps for the breeching and girths with wrap straps for the Hyperbike) he was still acting odd when I drove him. He was rushing, pinning his ears and twice he bucked when we went over real bumpy stuff. The only difference I made was his harness so I had to figure out what it was that he didn’t like about it.

Listening to the horse pays off!

He’s not very wide so it seemed his saddle fit him pretty well. I didn’t use any extra padding because the saddles themselves are nicely padded. I thought maybe he did need the extra padding since he’s on the lean side. I ordered the pad and added that next. He was a little better but only a little.

I was very frustrated since I knew this harness was so much better quality than my $350 starter harness that I’ve owned for years and had been using on him since I bought him. I talked with Mindy several times about what to do next. The only thing I could think of next was to go treeless. Well Mindy spoke with the harness makers and they said they would make me a treeless Comfy Fit saddle so it would still match my harness! We were both very excited about this. His harness has the brown lining and I was so happy that it would all still match.

When it arrived it was beautiful and looked just like the treed saddle but was, of course, flexible. I tried that one on him next (with the pad) and that did the trick. He was back to his old self again. I also would like to add that the saddle stays in place even over our rough and bumpy terrain. I know some people worry that the treeless wont stay in place as well.

I don’t really know where the treed saddle was putting pressure on him because it did look like it fit so well but there was pressure somewhere on his back that he didn’t like. We did bend the tree slightly to see if it made a difference but, like I said, it seemed to sit on him nicely from the start. I would think that having a wider horse would have presented this problem more than with a narrow horse but it’s something to think about. He loves his treeless and so do I. I’m also happy knowing that I could use it on other different sized ponies I might drive in the future and it will conform to their body shape. I definitely recommend the treeless if there’s any doubt that your saddle isn’t fitting properly.” 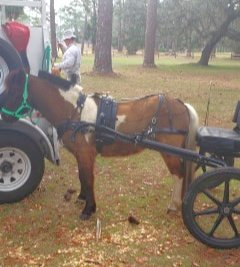 So if your mini, pony, donkey, mule, horse or draft horse is showing you that something isn’t quite right consider changing something about your harness. Whether it’s adding a neck connector strap or a martingale to your breast collar, changing your treed saddle for a treeless saddle, switching to a different style of collar to match your line of draft, sometimes all it takes is making a little change, to help your horse be happy and comfortable when driving.