The next conformation investigation is Parker. He is a 16 hand 9 year old gelding. His owner says, “I would love to know if he has a future in front of a cart. I’m submitting these photos for critique. He enjoys being driven and has been introduced to pulling a sled with me on it…”

It’s my opinion that most horses are built to pull something (though not all are mentally able to be driving horses). Whether they can pull a large heavily loaded wagon or a light jog style cart is totally dependent on their build. But horses are actually built more to pull than to ride. I remember when I learned that as I was studying to be an equine massage therapist. I was blown away as I began to understand how a horse’s back is made. It’s a sling, slung between the front legs and the hind legs. Everything is flexible and moveable. This is actually not ideal for carrying weight on it’s back. It’s not ideal for carrying extra weight on it’s frame either!

This leads me to another part of her comment above, the part where he has been introduced to a sled and does well. I have found, over the years, quite a few horses and ponies are fine when pulling a sled, but once you introduce the shafts things start to fall apart. I have thought a lot about this and think it boils down to claustrophobia. They feel they can’t move and bend once the shafts “trap” them. I’ll bet quite a few of those that are worried about the shafts are also worried about loading in a horse trailer.

I do think pulling a sled is a great way to start!! But don’t skip the travois step because you feel they are confident enough for the cart. (The highlighted words are a link to my personal blog about WHY I feel the travois is so important.)

Now! Onto the photos!

I really like the look of this boy. These photos are super tiny so I apologize for that, but I think you can get the idea. He has a very soft kind eye and a pretty shaped head. His neck ties in very well at the throat latch and the chest! This is a horse that would do fine with a straight style breast collar because it would be easy to clear the point of his shoulder and also be below his wind pipe.

He has a nice anglulation in his hind end, the gaskin, the stifle and hock. I know that he was a bit fidgety during this photo shoot so I don’t hold it against him that he is standing a bit splayed in the photo on the left and under himself in the photo on the right.

He nearly fits into a box. I only had to flatten it slightly. You can see that his shoulder could be more developed, however I think driving is a wonderful way to build that up! His back is a touch long but with some good in-hand work, his shoulder could lay back a bit more which would shorten that back up and open up the shoulder. This is where Long Lining would come in super handy!!

This is a hard one to judge. Because I know he was a bit fidgety… is he really turned out on that front foot? It’s hard to say. I think he may be as it looks like his knee also points out a bit. For pleasure driving this doesn’t bother me. I would keep an eye on his knee. Watch for swelling and heat if worked very hard because toeing out can be a bit harder on the joints. But honestly driving would be better for a horse with this type of conformation than riding. Even at his age if his hooves are trimmed and well balanced there is quite a bit that can be done for this as well. He has a nice wide chest which is great for any style harness she may want to buy!

It looks like he is only slightly cow hocked. This is also something I don’t mind! I feel horses that have a slight bit of cow hock can really get down and get traction better than a perfectly straight hind end. This may come in handy if you are driving up some inclines or through soft ground. Driving will help his hind end fill out a bit more just as it would help his shoulder!

So all in all I would say Parker is an excellent example of a pleasure driving horse! As far as his conformation goes, he should be a very nice driving horse. I can’t speak for his mental well being but he looks quite willing here: 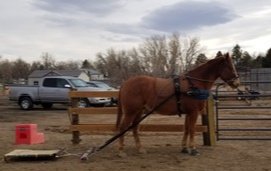 If you would like me to take a look at your horse, please send me an email at marketing@chimacumtack.com. Take a look at THIS POST for the information I need to proceed!