We often have people ordering harness for young horses and ponies. I don’t have a big horse or a cob, but I can share the measurements for my small pony, Zorro. I measured him first as a 3 year old and he is now almost 5, so I think these will be interesting! I would love it if people would share their measurements from when their horse or cob was a young horse and then the measurements when they fully matured. I think it would be interesting for people to see how much they change as they develop muscle and maturity!

(Also I’m sorry that I always use Zorro as an example! He is my main driving pony and I only have 2 to choose from here. I should start traveling and measuring all the ponies in my area so you don’t have to look at mine all the time. Though in this instance I do have some information to share about ideal weight and weight loss for ponies. Since I am the one that feeds my ponies and manages their living area it’s best if I share my own!)

I first measured Zorro in the spring of 2018, when he was almost a 3 year old. He hadn’t been in any work yet, just us messing around with some at liberty ground driving so he could learn the voice commands he would need to know later. He has been on hikes with his mom and my other mare. He had been on walks with his mama and I had ponied him off the back of the cart. But not consistently.

Here is a photo of him before we started our regular work. This was the harness I measured him for. The first MaraFUN SuperFUN harness, in Hurricane Blue and Lime green! 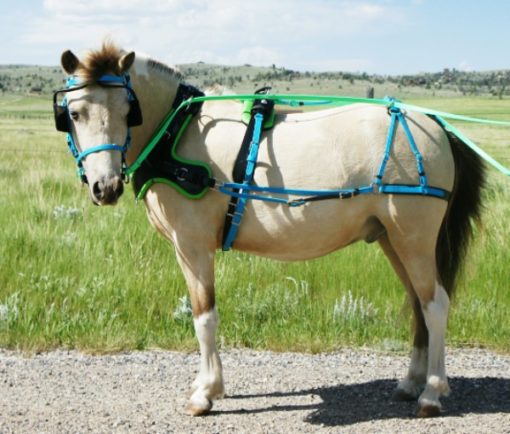 Here are his measurements from the spring of 2018!

The above harness fit him on all the largest holes. So it just barely fit. As you can see the breeching was a bit too short. The nose band was too tight as was the brow band. The girth just barely buckled. The SuperFlex collar was perfect. I had to adjust the back strap to be shorter. I learned that I needed a longer back pad. I learned that I needed to measure the brow band differently and that I liked my breeching ring to be at the center of the flank swirl, which actually made measuring a little easier as that is a very clear point to measure from and to! I also learned that I needed to be more careful when measuring the nose band. Accurate measurements make for a more accurate harness fit.

I did do some hill therapy with Zorro between April and December. I wanted him to begin to use his body correctly BEFORE I hitched him to anything, even a travois. He was so disconnected from his front end to his hind end that they literally looked like parts from two different horses stuck together. He had lots of issues with his lower back, just before his croup. He was butt high and goose rumped. He didn’t have core muscles. None of these things are ideal for starting a driving horse. I didn’t want him to begin his driving with these issues because driving with them would make them worse and more noticeable. Below is his before and after photo for those few months:

He learned to use his neck properly which gained him a few inches of neck length and tighten up his tummy a little bit… though little did I know how much he could tighten up! Ponies don’t have to be heavy and thick just because they are ponies. (more about that below!)

In December I measured him again. This was just before I started teaching him to drive. 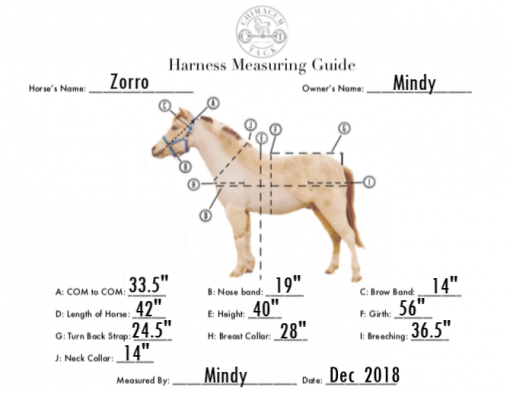 And then we started his driving career! We drove nearly 400 miles last year, from January 2019 to December 2019. So many miles in the mountains, over technical terrain, down long dirt roads and with friends. But as the summer went on Zorro got fatter and fatter. I tried to feed him as naturally as possible, allowing forage, low sugar low starch grass hay, 24/7 in slow feed nets. Even with all the driving we were doing he was just gaining and gaining. This was him mid summer – wearing his new ComfyFun Trail harness. This harness was based on the measurements from Dec 2018. This was him at his fattest. 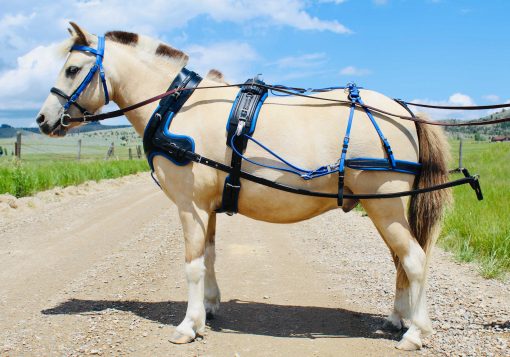 The harness fit very well! Even though he was fat. I had the brow band measurement correct and the nose band fit. The SuperFlex fit well, with the large Shetland collar cap, and the breeching was perfect! The girth was a little short so I had to have a longer one made. I wanted to slide the saddle back a bit but couldn’t with the shorter girth.

Fast forward a little bit. My vet said my ponies needed to lose about 100 pounds each. I was horrified and immediately started them on a strict diet, feeding them 1.5% of what we guessed their current weight to be about 380-390 pounds. So they each got about 5-6 pounds of feed a day, in a slow feed net, split between two feedings. I stopped feeding them grass pellets and their protein supplement. They only got hay twice a day. It was so hard for me to do this.

I upped their exercise regimen and winter came which helped them lose a bit since they used their excess body fat to stay warm.

This spring they looked pretty good! I was able to weigh Zorro and he weighed 340. So he had lost about 40-50 pounds. When I was able to weigh him again – a week later – after lowering his daily hay amount to 4 pounds total for the day, he weighed 328. So he lost 12 pounds in a week! I wrote a blog post about what the ideal weight is for horses, ponies, cobs, etc over on my personal blog. You can click HERE to read that!

I measured Zorro last week and this was what I got: 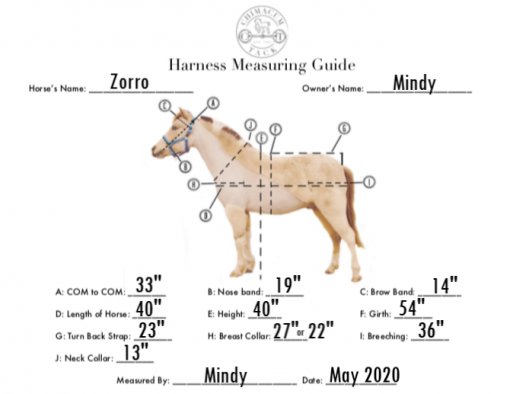 As he lost weight his neck got smaller. An inch is actually quite significant for a pony his size! He lost 2″ in his body length – I think because his tummy got smaller. His girth got smaller, but I have to explain that when I measured his girth on the two charts above I measured at his heart girth. This is not correct because we actually don’t want the girth to sit in the girth groove as this pulls the saddle too far forward. So for this chart I measured a bit back from his heart girth, so the saddle could sit on the flattest part of his back. So his actual heart girth measurement is 53″. He lost 3″ on that measurement since last December! His breeching measurement is only 1/2 an inch smaller. And because I changed where his saddle sits, his turn back strap measurement also got shorter.

I found this very interesting. So if you are currently measuring a very obese pony like mine was, it’s possible that things will have to go through a major adjustment as they lose the weight. Also I found it interesting that when I measured him correctly the harness didn’t need much adjustment as he matured, even as he got fatter and fatter! Most of the major adjustments happened as he lost the weight.

To have the SuperFlex collar fit him now I have to use the smallest collar cap, adjusted to the second hole. This allows the collar to measure exactly 13″. With the medium collar cap it measures 14″ and with the largest collar cap it measures as big as 16″! His girth is now a little too long. I have it almost to the tightest hole on both sides! I had to shorten the turn back strap even more and make a one hole adjustment on his trace length when I hitched him the bike after he lost so much weight.

In the photo below I’m guessing he weighs about 315. Ideally I would like to see him at 300 pounds. 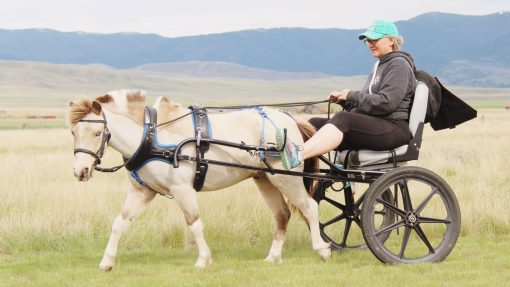 We all learn as we go along on this journey. I find driving to have a very long learning curve. If we are honest, all of us are still on this curve, learning as we go! I hope the new measuring video goes a long way to answering some of the measuring questions we see and will clear up some of the fuzzy parts of measuring. And as shown above, we all learn more about measuring the more horses and ponies that we measure! Please don’t hesitate to contact me with any of your measuring questions. I am always happy to trouble shoot with you. My email is marketing@chimacumtack.com and my phone number is 406-548-7900.