One of the best parts about all of our jobs here at Chimacum Tack, is helping both new and old HorseDrivers dreams come true! We especially love to hear about the new junior drivers entering our sport.

This story is written by one of our dear friends, Charles Michael. It is a story about his daughter’s pony, Pippin, and the journey their family has taken with this special pony to help welcome their daughter and pony into the world of horse driving.

The Story of Pippin

This story could have been titled the story of Josie but it is really the story of a group of people and a pony. Josie is an eleven year old girl who has been taking riding lessons from my daughter, Makenzie, since she was six. Up until recently her mount has been a pony named Pippin. This last year Josie experienced a phenomenon experienced by many adolescent equestriennes… she outgrew her pony.

Makenzie refused to give up her own pony, Tiffany, long after it was time. She understands the trauma involved in the changing relationship between a pony and a little girl – who has grown while her pony has not. Today, Makenzie and her husband, Shane, own and operate Timberline Farm, an Equestrian Center near Bonanza, Oregon. She teaches both children and adults in the hunter jumper and dressage disciplines.

In the past year Josie has also had to contend with a family crisis. Makenzie asked me if I could train her pony Pippin to drive so Josie could go on using him. During 45 years working as a Farrier I almost always had a horse in training. It was only after I retired that I became interested in driving. I bought a half Fjord gelding as a weanling and built a cart. My wife Joyce and I joined the Klamath Basin Carriage Association in eastern Oregon. It was then that I became acquainted with Janie Amdal, the owner of Chimacum Tack, when I bought a sport harness for my horse. That was fifteen years ago.

I also am a surviving cancer patient. I sold my horse and harness in 2017 at the beginning of radiation/Chemo therapy. Today I am cancer free.  I was excited by the opportunity to work with another horse but how do I train a pony to drive without a harness?

Over the years I had been receiving emails from Chimacum Tack. I remembered receiving one with an article about Chimacum’s Whiteman Harness Program where Janie provides their Whiteman pony harness to deserving beginning young drivers. I inquired and a week later I received a response. Janie seemed as excited to provide the harness as we were to receive it. A few days later we received the beautiful new biothane harness.

Now we had the harness but no cart. I emailed Michael Wakefield, past president of our carriage club. He also drove a stage coach all over the country for Wells Fargo Bank. He is a certified driving instructor. I informed him of our need for a pony cart. About a week later Michael informed me that Valerie Greenwell, a member of the club and a friend had a cart she would donate. The cart had been sitting in her barn for years, but was in good condition. Valerie is an avid driver and held CDE competitions for years at her ranch.

A friend of ours son, Lenny, is a body and fender repairman for Tommy Carr body shop in Gold Hill, Oregon. Lenny does restorations on classic cars. He talked to Tommy and he agreed to donate refinishing the cart. A few weeks later it came back powder coated a beautiful fuchsia, Josie’s favorite color.

I kept Janie informed of our progress and she kept saying, “See what people can accomplish when they work together.”

Pippin is a pretty 10 hand gelding. He may be a Shetland/Welsh cross. He is chestnut color with a white blaze and white socks. Pippin and Josie have won blue ribbons in hunter/jumper competitions. I found his mind to be as beautiful as his outer appearance. I started driving training from scratch with him. I wanted him to be as bomb proof as possible. A four hundred pound pony can gallop pulling its own weight or more. I longed him and taught him to ground tie. I ground drove him and then pulled a tire with him on a track around Makenzie’s eight acres. The first time Josie ground drove her pony she jogged behind him around the arena and around the jump standards and wall for what seemed like forever. It was the first week in December before I sat in the cart and drove him around the arena. Some ponies are born to drive. After a half hour of walking I said, “Trot on” and away he went at a nice consistent trot. 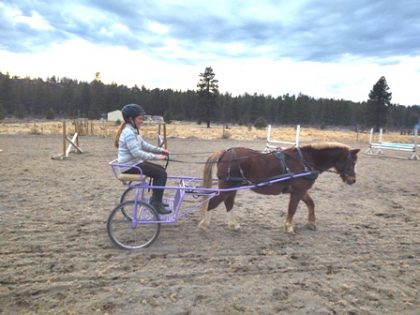 The next Saturday Josie drove him solo around the arena for an hour and a half. She had a smile on her face the entire time. Two days later I drove Pippin around the outside track. He performed like a standardbred. I have to admit, we have formed a bond and he has been therapeutic for me. I have missed horses. They get into your blood. When I went to his paddock that morning Pippin nickered and trotted over to me. He thinks he is a dog and licked my hand. He was eager to go to work.

Pippin stands forever when I have to fiddle with the harness. When I enter the cart he doesn’t move until I tell him to.  He is a wonderful, obedient pony. I am sure Josie will get as much pleasure from him as I have. Makenzie wants to have a “Driving Day.”  I am going to approach Michael to see if he would be willing to bring a horse and cart and donate his time and instruction to her students and their parents.

It’s amazing how much people can accomplish when they work together.  Our heartfelt thanks to Janie and Chimacum Tack.

The Whiteman Harness was created as a tribute to Ron Whiteman, who passed away in early 2018. Ron was an important influence in making Chimacum Tack what it is today. Ron and his wife, Dorothy, (who is also one of our amazing ambassadors) were also responsible for bringing many people to the driving world, championing fun, friendship and happy, healthy ponies. The Whiteman harness is offered, in Ron’s honor, for beginning drivers who need a little help to get a safe, sturdy, comfortable, well-made, all purpose harness

We do not put a price on this harness because it is keyed to the needs of the customer. Our goal is to make harness available to people in need of assistance to begin driving. This harness is for those that are living on a very strict budget and need help to purchase a harness. The Whiteman harness is intended for people in need financial assistance.

Kirsty brings both her passion for horses and social media experience to Chimacum Tack with the role of introducing HorseDrivers across the globe to our brand while connecting and strengthening the driving community online.