This summer, our dear friend and long time customer, Polly Vacher, set out with her two donkeys, Wizard and Muffin, and her standard poodle, Nelson, on their Donkathon adventure! These three brave souls traveled 227 miles from South Oxfordshire to North Wales in order to raise money for the Multiple Sclerosis Society. Polly, Wizard, and Muffin have been successful in raising over £43,000 so far for MS Research!

Polly, now 77 years young, was the world’s first female pilot to fly a single engine aircraft solo over the North Pole and Antarctica in 2003, but sadly she is no longer able to fly after losing sight in her right eye following major eye surgery in 2019. It was from her hospital bed and the depths of knowing she would never be able to fly again she started planning this journey.

“I’ve flown twice around the world but this is a little bit different, I’m not interested in being the fastest or best it’s just a challenge for me and I’m doing it for my nephew Alexei who has MS”.
~ Polly Vacher MBE

Polly’s nephew, Alexei, was diagnosed with this progressive debilitating disease of the central nervous system at the age of 26.

The Donkathon started in North Moreton, Oxfordshire on the 25th June and travelling at around 2 miles an hour will arrive at the pilgrimage church of St. Melangell in North Wales on the 25th July. Polly shares the story of her adventure with us below.

On a cloudy but dry day there was a special send off for the two donkeys, Wizard and Muffin and our standard poodle Nelson. We had a catering bus selling bacon butties and two pipers to send us on our way.  What were our thoughts as Wizard and Muffin were all harnessed up with our beautiful Chimacum Tack pairs harness and we set off on a 200 mile journey with two donkeys, a standard poodle and a carriage? I remember clearly thinking ‘take one day at a time’ and this is what we did. The Donkathon had begun.

We had a large banner over the carriage which read ‘DONKATHON FOR MS RESEARCH’  This was a stroke of genius as not only were we clearly visible but all along the route people stopped us for a chat and to give us a donation. We raised over £4,000 in our collecting boxes this way.

Our route took us through Burford and into the Cotswolds. Some of the hills were a challenge for the donkeys but when we came to steep hills everyone except the driver  got off the carriage and walked. On country lanes Nelson ran alongside the carriage. Of course, hills go down as well as up and the old adage is true ‘Going up hill the donkeys sweat – going down hill the driver sweats’!

Travelling through the network of country lanes in the UK at 2 mph was a special privilege. You see and hear so much that is just not possible to hear or see from a car. In the Cotswold village of Kineton we had a ford to cross. This is very near the Cotswold Farm Park and Adam Henson (from the television programme Countryfile) came out to help us across the ford. Donkeys, being desert animals are wary of water, but we did a lot of training to get them thoroughly acclimatized to walking through fords of varying depths. 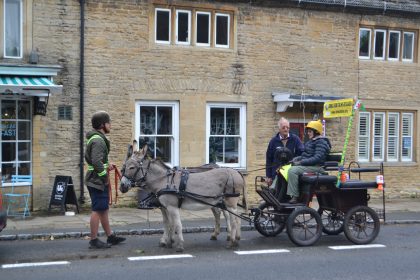 We had to cross a number of main roads but we had a competent team of volunteers wherever we went and they escorted us across busy roads, stopping the traffic in their professional yellow jackets! On the country roads the drivers were most considerate and always had a smile for us.

Excitement mounted as we entered Wales but frustration as well. The border is not a straight line and we found ourselves weaving in and out of Wales  We have several different photos of  ‘Welcome to Wales’ signs!  The weather was warmer, but the donkeys thrived on the warmth even if the humans found it more stifling.

On the last day nostalgia set in – we had had such an amazing experience we didn’t want it to end. At St Melangell we had the warmest of welcomes and the donkeys’ held their heads high as a clapping crowd awaited our arrival. As soon as the donkeys were settled in their field shelter Christine Browne (Vicar of St Melangell) held a moving service outside in the donkey field. She had worked hard at researching references to donkeys in the bible and wove the service cleverly around that. It was an emotional time as John Hughes – the singing farmer accompanied himself on his guitar for another rendering of ‘the Donkathon song’. (see www.donkathon.org) 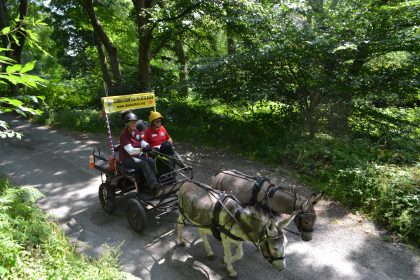 For more details check out the ‘Daily Blog’ on www.donkathon.org where you will also find the full script of the service at St Melangell.

Kirsty brings both her passion for horses and social media experience to Chimacum Tack with the role of introducing HorseDrivers across the globe to our brand while connecting and strengthening the driving community online.